The wild and wacky world of Astronaut Academy is back! Book 1 (Zero Gravity) and Book 2 (Re-Entry) have and been updated with space-age color to synch up with an all-new Book 3 called Astronaut Academy: Splashdown! 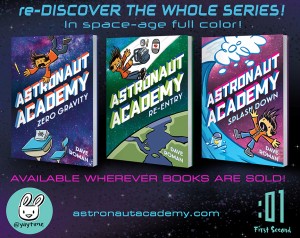 Dave Roman is the author of several graphic novels including the Astronaut Academy series, Teen Boat! (with John Patrick Green) and Agnes Quill: An Anthology of Mystery (with Jason Ho, Jeff Zornow, & Raina Telgemeier). He has contributed stories to Explorer: The Mystery Boxes, Nursery Rhyme Comics, and is the co-author of two New York Times bestselling graphic novels, X-Men: Misfits and The Last Airbender: Zuko’s Story. Roman is a teacher at the School of Visual Arts, is an editor for First Second Book’s History Comics series and worked as a comics editor for the groundbreaking Nickelodeon Magazine from 1998 to 2009. He lives in NYC. Check out his webcomic comic Starbunny, Inc. and his Pup and Duck comics at SundayHaha.com

Astronaut Academy was drawn with a #2 pencil on Strathmore Bristol paper. It’s then inked using Speedball Super Black india ink applied with a Windsor Newton Series 7 brush and eventually graytoned in PhotoShop. The books are a combination of hand-lettered and using a font based on my hand-lettering. 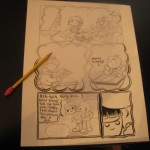 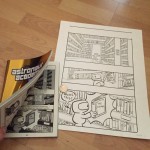