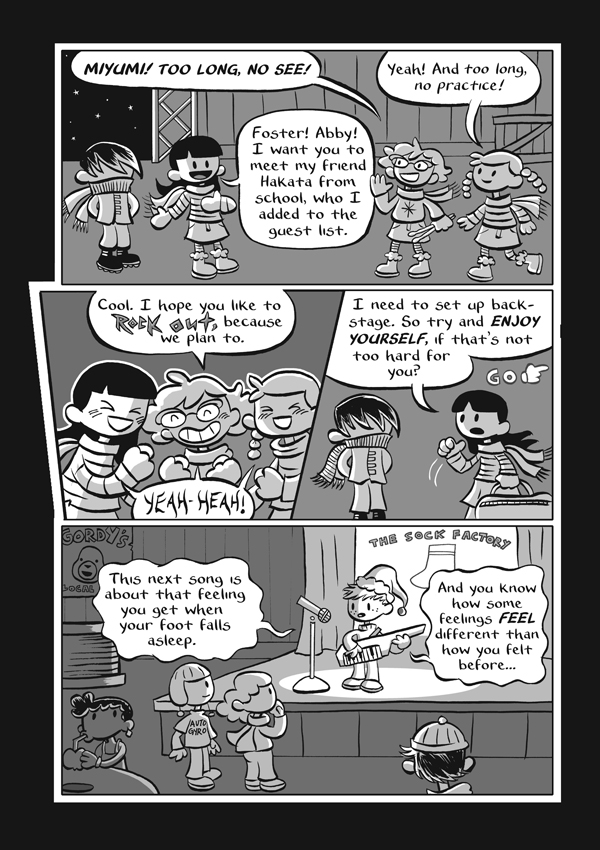 The introduction to Miyumi’s bandmates in the Supercutes. Abby is named after my friend Abby Denson, who has performed in a bunch of rock bands including Mz. Pakman, Let’s Audio, and Abbymatic. Foster is named after Kathy Foster from The Thermals and All Girl Summer Fun Band, one of my favorite bands that I always imagined being part of the Astronaut Academy universe!

In the background of the last panel, there is a poster featuring Gordy, the owner of the Sock Factory. This is a tribute to the sock-loving character from the Bumper Boy comics by Debbie Huey (used with permission!).

The opening act is a one-man band called Auto Gyro who likes to sing songs about feelings. This is a nod to musicians like Glen Hansard (who I freakin’ love with all my heart), who sometimes over-explains his songs to the audience (in a charming way!). According to the show flyer (seen at the end of Book 1), Auto Gyro is performing a holiday-themed set.

I first learned that autogyros were a real thing from the Frank Capra movie “It Happened One Night” starring Clark Gable and Claudette Colberg.